A (short) collection of the personal projects I have worked on throughout the years. More work can be found in the Blog section. 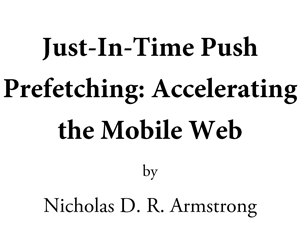 My most extensive personal project to date has been my Masters Thesis. My thesis proposed a technique for speeding up web browsing over mobile networks through a proxy server that scans server responses and pushes content to the user just-in-time, and involved the construction of a Node.js proxy and Google Chrome browser extension for measurement. All of the intricate details are in Just-In-Time Push Prefetching: Accelerating the Mobile Web. 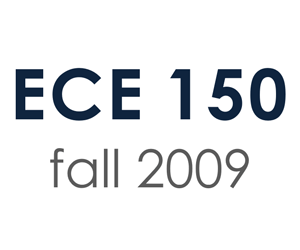 During my time as a Masters student at the University of Waterloo, I had the opportunity to TA for Bill Bishop in the Fall 2009 edition of ECE 150. During my time as a TA, I put together a few examples of the concepts taught in the course.

Things You Learn in Engineering

Unsurprisingly, you learn quite a number of things in Engineering that you'd never expect to learn. What is surprising is the variety and peculiarity of things that you do actually get taught. After a lengthy conversation about the things we had "learned", I threw together a page of items in the (then) style of the UW first year information package so that prospective students might get a complete idea of all the things they might learn at UW.

When I was just starting out with WPF, I wanted to get a bit more experience with WPF Animation, and so I took a Saturday morning to build a neat little move-style title animator. It animates a series of "titles", a position/name string, on to a black screen at a configurable interval; more details, and a link to the source, are on the WPF Title Animator page.