I recently wrote a (modern/metro/windows store) app for one our partners that we wanted to deploy internally for testing prior to a larger release. This is known as sideloading. Microsoft’s policies for sideloading are, roughly:

Our devices are not domain-joined and this was not for permanent installation, so we went with option #3. Microsoft doesn’t make this particularly easy - and TestFlight does not support Windows - so I needed a way to make it easy for users to install the beta build and install updates throughout the test period. The Windows Installer .msi format seemed like the perfect way to distribute builds, since it supports installations and upgrades for Windows applications, and can easily be deployed using various system administration tools.

My normal go-to solution for writing .msi installers is WiX, the “Windows Installer XML Toolkit” - which makes Windows Installers survivable, if not easy. And we were already using it for the accompanying Windows Service component, so it made sense to bundle our UI in the same package. Unfortunately, the current version (3.8) of WiX has no built-in support for installing apps into the Windows modern environment.

Here is how I rolled my own solution for installing Windows apps using WiX.

At a high level, the things we need to do are:

You will need the WiX toolset installed to open the setup project.

We’re going to start off with a Windows Store application and a WiX setup project in the same solution. This allows us to automatically build the latest version of the application setup easily when we are developing (and keeps all of the code together if you want to build automatically from your sources).

Here, I’ve used the built-in templates for a Windows 8.1 application, and a WiX setup project. I’ve also split the configurable parts of the .wxs file into a .wxi file for easier updating. 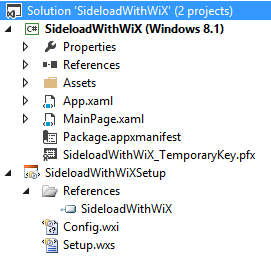 Windows bundles apps into APPX packages. These packages contain all the code and associated information needed to install the app into the modern environment, display the app’s tile, and grant access based on the requested permissions. Visual Studio will build this package on demand through the ‘Create App Packages’ wizard - but we want to do this automatically on every build so our setup can include it.

Visual Studio builds its packages the way it does regular builds - by calling msbuild with the project file. It also sets a special flag GenerateAppxPackageOnBuild that the app build targets use to decide whether to package the app or stop at the loose files. By setting this flag for all builds in the project file, we can ensure the app is always packaged.

Open the app’s .csprj file in a text editor and add the following PropertyGroup:

Now when you build the app in Visual Studio, you should see an AppPackages folder in the output directory containing the package files. This folder can be copied manually to another computer and the included Add-AppDevPackage.ps1 script run to install the app. This is precisely what we’ll be doing with our installer. 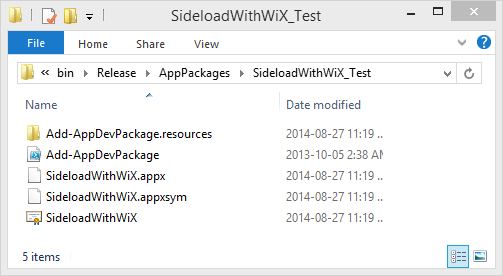 Copy the package to the device

Next, we want to bundle the APPX package into our installer. Our installer will copy this package on to the target device, where we can use the bundled script to do install it.

WiX has a number of different ways for specifying which files to copy, but the easiest way for us is to use the HarvestDirectory task to copy the whole package directory without specifying each file individually.

This is specified in the setup project’s .wixproj file, so open that in a text editor and add the following:

You should also make sure that the setup project references your app project, and any WiX libraries used (e.g. WixUtilExtension, WixUIExtension).

What these snippets of code do is instruct WiX to copy all of the package files into the INSTALLFOLDER; we assign the component name ComponentGroup.App to our package so that we can refer to it in our .wxs file.

All that’s left to do is tell WiX that it’s part of our default feature:

Get a developer license

Now that we’ve got the installer successfully copying the app onto the target device, it’s time to turn our focus to the install process for a developer-licensed app. The Visual Studio-provided Add-AppxDevPackage.ps1 describes the process thusly:

For our purposes, we want to tweak the process a bit:

I created a script – Check-WindowsDeveloperLicense.ps1 – that you can get from the accompanying source code to handle step 1. All we have to do is update our WiX install it to copy it to install directory, and invoke it with PowerShell.

First, add a component group to copy the scripts to the install directory:

Add the component to our feature table:

Then, use a property to locate PowerShell on the system:

We need two custom actions to run our script: the first to set the command line, and the second to run it.

We also need to use the following flags when calling PowerShell. In particular, -ExcecutionPolicy Bypass is necessary as Windows does not allow execution of PowerShell scripts by default. By using the flag, we don’t need to change the machine policy but can still run our script.

Finally, we schedule the check as part of the install sequence:

Now that we’ve got everything copied to the target device, it’s time to do the actual installation. Looking at the previous list, there are two steps remaining to install the app:

WiX gives us the ability when running custom actions to specify whether they will they will run in the LocalSystem context or in the user’s context. We’ll need to run each of the above steps in a different context, as the app itself must be installed as the user, while the development certificate must be installed as system. Both steps are handled by Add-AppxDevPackage.ps1, so we’ll need to call it twice.

This leads us to four additional custom actions:

These actions depend on a few additional defines:

When run by a user, Add-AppxDevPackage.ps1 first to see what operations it needs to do (get license, install certificate, install app), then elevates itself (if not already elevated) listing the elevated tasks, and then finishes by installing the app. The internal behaviour of this script is undocumented and may change in future versions, but for now we can nudge it to do what we want.

When launched elevated, the script looks for a list of operations should perform, as arguments:

When passed, these arguments skip most of the internal validation checks - which works in our favour. By launching the script elevated with -CertificatePath, it will install just the certificate. So that is precisely what our first custom action – CustomAction.InstallCertificate – does.

We then call the script again, this time without arguments as both the developer license and certificate are installed. This is our CustomAction.InstallAppx action. Note how Impersonate is set to yes to make this action run as the user.

Finally, we finish the installer by adding the actions to our install sequence, which now looks like:

We now have a working installer that sideloads our Windows app - but it has one fatal flaw. If you try to uninstall our app, all the files we installed will be removed but not the app itself. The built-in actions in WiX handle most of the clean-up tasks automatically, but since we are using custom actions to install the app, we need to add custom actions to remove the app as well.

Removing the app is perhaps the trickiest part, as our app package doesn’t include a script for removing an app like it does for installing one. We have to rely on PowerShell’s built-in Remove-AppxPackage function, which frustratingly uses the full package name of the app.

I’ve put together my own removal script – Remove-AppPackage.ps1 – which is available in the accompanying source code. It also takes the (short) package name of the app and searches the installed apps for a match, then uses the full name as-installed on the device to do the removal.

Like the license check script, we need to copy it to the target device and call it with PowerShell:

And update our install sequence to remove on uninstall. Note that the RemoveFiles action occurs before InstallFiles, so I usually put the remove actions before the install actions. The exact sequence of actions is available on MSDN.

By setting the custom action condition to Installed, the installer will also handle upgrades. On an upgrade, the previous package is removed and then the new package installed.

For simplicity, I’ve ignored a couple things you may want to consider when developing your own apps:

Installing Windows apps with WiX is not a perfect solution, and has a few limitations to be aware of:

There you go - sideloading (modern/metro/windows store) apps is possible with WiX, though it takes some care.

See the source code accompanying this post for my complete solution with all of the source files described here.